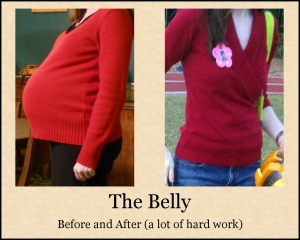 The night before my younger son was born (as seen on the left above), I weighed more than I ever want to weigh again. And losing that weight was a lot harder than with baby number one. That came as a shock, accompanied with a good deal of worry over whether I would be able to keep the weight off – if it ever came off at all.

I have one of those lovely body types that gains weight if I so much as look at a cupcake. I’ve tried various exercise routines over the years, and finally found success with a combination of P90X and a couple interval routines, which have helped me achieve a level of fitness I never expected. The problem is, however, that exercise is only part of the solution. Living under the impression that I could work off the pizza and doughnuts and Saturday morning fast food breakfasts only lasted so long—just long enough for me to start regaining my baby weight (but this time without the baby).

When my clothes became uncomfortably tight, my options were to give in and buy larger ones or revolt against what I’d done to myself and take action. I took action.

Before actually doing something, the shift came from within. I know that sounds metaphysical and whatnot, but it’s absolutely true. There is a huge difference between thinking, Hmm, I really could lose a few pounds and realizing, Something has to change, and I’ll do whatever it takes to make it happen—permanently. Follow-through is a must, but there has to be that driving decision first.

I heard about Wheat Belly: Lose the Wheat, Lose the Weight, and Find Your Path Back To Health

a year or so before I decided it might be worth looking into. I didn’t want to cut out wheat. It seems to be in everything, including many of my favorite foods, but I was desperate and hoped it would make a difference. My husband thought author William Davis, M.D. was a quack, but since I was the one buying groceries and cooking, he had little choice but to eat my wheat-free food, at least at home. He lost nine pounds.

I’ve been reluctant to discuss this decision because most people think I’m stupid, latching onto a fad. I mean, why deny myself “regular” food if I don’t have an allergy that prevents me from eating it? At the same time, however, I was pleased by a number of people who came out of the woodwork and told me how going wheat-free has changed their lives for the better. As a friend said, even if only one-quarter of the book is true, that tiny bit of information is worth heeding.

Today’s wheat has been genetically engineered to grow more plentifully, and in doing so, its gluten content has risen dramatically. Franken-wheat, some call it. What struck me most about Davis’s research was the number of conditions apart from celiac that are affected by wheat consumption. Many of Davis’s patients had problems that no other doctors could fix, yet the simple deletion of wheat from their diets solved them.

And then there’s the obesity issue. Although whole wheat is recommended as a fiber-rich staple that should be a part of everyone’s diet, whole wheat bread elevates blood sugars nearly as high as white bread (don’t believe me—believe Harvard Medical School). While this is particularly harmful to you if you’re diabetic, this even affects people like me. The two slices of whole wheat toast that I used to eat every morning caused a blood sugar crash that made me ravenous two hours later.

The Paleo Diet has a lot in common with Wheat Belly, although there are places where the two diverge. If you follow the “primal” version, you can have dairy, while many Paleo followers shun milk products altogether. Either way, the main idea is that humans started as hunter-gatherers, and we survived just fine without processed foods.

Paleo depends on many natural foods, but carby foods like corn and legumes are a big no-no. There are a number of great Paleo recipes that I’ve tried, but I have not gone completely Paleo. Instead, I use a blend of the two diets I’ve discussed, as well as some gluten-free selections. Even so, the mere deletion and substitution of certain elements of my diet isn’t enough, which leads to the third and most drastic thing I’ve done.

Making my own what? Well, a lot of things. Pizza dough, protein bars, almond milk, almond meal, coconut milk, coconut flour, peanut butter, tomato sauce. When I cut out wheat, I knew we couldn’t eat out as much, so that meant cooking. By making a lot of things from scratch, I not only keep the cost down, but I also control what my family eats. The pre-made items that I do buy go through a lot of scrutiny first. If I don’t know some of the chemical-sounding ingredients, or if sugar is toward the top of the list, I make it on my own. I also avoid buying canned or frozen food as much as possible.

In short, I’ve become one of “those” moms.

I started to take an interest in natural remedies while doing research for a character in one of my novels. (It always comes back to writing for me, doesn’t it?)  Many people never think twice about popping a pill to fix their problems, but I would rather live in a way that keeps me from having problems to begin with. And if I need medical help, I would rather use nature’s treatments first.

I never even knew coconut oil existed before I read Wheat Belly. I assumed that I would have to buy it at a specialty store and was surprised to find it everywhere I normally shop. While I knew that hydrogenated oils are bad, I didn’t realize how bad. A friend gave me the book The Coconut Oil Miracle

, by Bruce Fife, C.N., N.D. This truly is a miraculous oil. Not only is it a natural antibiotic, but it’s also antiviral and can even help fight the flu.

So what does coconut oil have to do with weight loss? It gives us energy and increases our metabolism. This is wonderful for people like me. I have to exercise two to three times more than people with fast metabolisms just to keep from gaining (and that’s only if I eat right, too).

What I discovered, even before I lost any weight, was that I was transformed, and not just physically. Although changing my eating habits certainly keeps me satisfied longer, the way I think about food (it’s not a social or even a comfort activity for me anymore) underwent an even more powerful transformation.

The weight loss is great, but the health benefits that I will reap from my change of lifestyle will last me, I hope, much longer than the clothes that I can fit into again.

• The Benefits of Cutting Out Gluten but Not Going Gluten-Free

• All Sorts of Pretty (almond and coconut recipes)