I am often grateful that I married a fellow introvert. I have an accomplice who is just as uncomfortable as I am in social situations, who gives me an easy out when I don’t want to do something – because he doesn’t want to, either. Nowadays, of course, having kids is a good excuse, too. Kids aren’t invited? Darn, well then I guess I won’t go.

But then there are times when I have no excuse. Like my husband is working, and I have to take my kids somewhere. After having two boys, I told Thomas that he was in charge of getting them into sports and whatnot. And then you know what? He got a job working nights, so who has to take the kids to their events? Me. I’m the mom that no one else knows. Part of it is because I’m chasing my toddler and don’t have time to socialize, but even if I didn’t have him, I would likely be sitting in my chair, reading a book.

It’s always a fight for me. I try to be polite; I really do. And when I get to know you, you might not guess that I’m an introvert because I can come out of my shell and be friendly. But talk in front of a group of people? Make a phone call to someone I don’t know? Stand at the front of the church and sing a solo? This is the stuff of nightmares for me.

“You know why that is, right?” a friend said to me. “It’s because you don’t do it enough.”

Uh-uh. Nope. I played in plenty of piano recitals. I daydreamed about getting up there and wowing everyone with my talents. But in reality, my stomach churned, my hands trembled, and my mind became a blank. It’s always been a battle. But it’s one that I’m glad I’ve fought. Otherwise, I might still be sitting on my parents’ couch, lonely and wondering where I’d gone wrong.

Thank goodness for the people in my life who have intervened. In high school, when I was overweight and sensitive and recovering from a number of friendships that ended in backstabbing and typical teenage ugliness, I spent a year homeschooling and avoiding my peers. My family finally forced me to get involved with musical theatre, promising me that I would love it once I tried it.

You could not imagine a more awkward or shy girl as I went to that first rehearsal. I knew no one and had no idea how to strike up a conversation with total strangers. But it turns out that new people aren’t completely evil and scary. Not only did I make some life-long friends, but I even met my husband.

Time and again, I’ve had to fight myself to get ahead in life. I was embarrassed to start college just after I turned seventeen; I felt like I had a flashing red sign reading “Minor” over my head. But I kept a low profile and made it through – even helped found Fiction Fix, a literary journal that’s still going strong today.

Then I was scared to pursue any kind of job aside from the one I already had. When my son’s school sent a plea for substitute teachers, I could safely ignore it because I had a new baby. But when they were still looking for subs months later, I didn’t have an excuse anymore. I know it sounds silly, but it took a lot of courage for me to contact the educational staffing service that hires and assigns subs. But I did, and it turns out that I love teaching.

So this week, a week full of late nights and meetings and obligations, my elder son started bugging me about his school’s family fun night. It was at a skating rink, and a lot of his friends were going, and as I told another parent, my only excuse was that I didn’t want to go.

After fighting with myself for a couple days, I decided to take the kids. You’re not doing this for yourself but for Peter, I kept thinking.

We stayed up late, and the kids were worn out, and they played with friends, and they fell all over the place on roller skates, and it was some of the best people-watching I’ve ever experienced. When Peter asked me if we could go back next year, my immediate answer was yes. Like refusing to eat a new food because you think you won’t like it, sometimes you just have to try something before you find out you’re wrong.

Of course, there are still plenty of things, like piano recitals and college presentations, I am glad to have behind me. Good riddance. But I can’t say I wished I’d never done them. I have to remind myself that even when I’m uncomfortable, I learn a lot (even if just for future book fodder). Other times – like meeting my husband in musical theatre – I am thankful that I didn’t dig my heels in so much that I missed great opportunities. It’s baby steps, man.

It’s funny that I can send query letters and receive rejections all day without being bothered too much. I mean, sometimes I can get ticked off (like after this rejection), but I don’t get nervous. But making a phone call to a bookstore to ask if they’ll sell my book? Good Lord, that’s hard. Sometimes it ends negatively, but other times, I make great new connections.

While I like my introverted self and being the girl on the couch with a book, there are times when it’s worth it to push past my usual limits. I still don’t like social events, would rather be in the comfort in my home, but I am also interested to see what kind of opportunities could pop up in any given week; there’s no telling when one might change my life again. 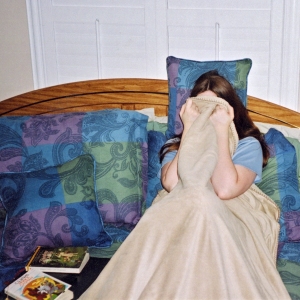 Just let me read in peace!