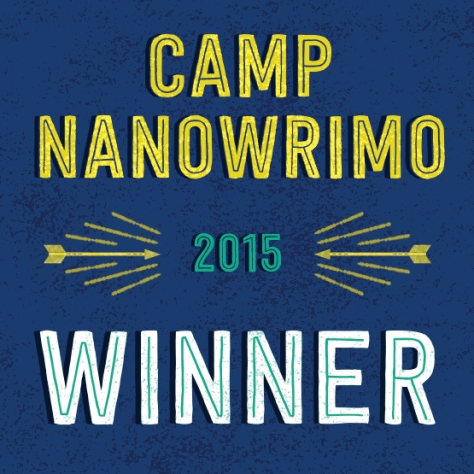 This time last year, I never would have thought of participating in Camp NaNoWriMo. I was too concerned with having enough material for NaNoWriMo in November to use up all of my creativity in July. But of course, a year before that, I never would have thought I would participate in National Novel Writing Month to begin with. Write 50,000 words in one month? It seemed like the kind of thing that crazy people with no life would do.

So I guess I’m a crazy person with no life.

If you’re a regular reader, you know that I participated in NaNoWriMo 2013. I didn’t even decide to do it until the weekend before November 1st. I never expected to actually write 50,000 words, but I wrote much more than that. In 2014, I signed up for NaNoWriMo again, and although it wasn’t nearly as easy the second time, I wrote the sequel to the 2013 novel, and I plan to write the third book of the trilogy this November.

Camp NaNoWriMo, which is a more laidback version of NaNoWriMo, takes place in both April and July. Instead of writing a 50,000-word novel from scratch, you simply declare your writing project goal for the month and then try to complete it. The minimum word count is 10,000, and you can even work on something that’s not a novel. April was a no for me both times because I was in the middle of editing the previous Novembers’ novels. But if you read my recent summer writing post, you already know that things changed for me this summer.

After finishing the latest revision of my 2014 novel, I gave my Muse a few days’ rest, but then she came back, apparently ready to get to work on a manuscript that’s been kicking around since 2009. It’s a story that I would add a scene to every once in a while, but I probably hadn’t opened the document in two to three years. After reading through everything I had – a little under 17,000 words at the time – I realized that I was ready to fill in the missing scenes, maybe even finish it.

I started writing, and much like my NaNoWriMo 2013 experience, it was like to direct the wall of water after the dam has broken. Then I realized that it was July, and if I was going to be writing anyway, I might as well declare my intentions officially by participating in Camp NaNoWriMo. When I signed up on July 9th, I was already at 20,000 words. Just in case the ideas petered out, I gave myself what seemed a pretty easy goal of 35,000 words total. That meant I only had to write 15,000 more in order to succeed. There were a couple days when it felt like I might be pushing it, but for the most part, inspiration was on my side.

I was at almost 54,000 words – well past my goal of 35,000 – when I began to slow down. I still had a week left, but I was already feeling the itch to edit. This is a no-no in NaNoWriMo because it can compromise your word count and keep you from finishing. But for Camp NaNoWriMo, I had more flexibility, and I really needed to go back and fix a big problem. I realized that I had too many main characters, one of whom was only the shell of a character. In my own mind, I considered him a throw-away – what would readers think? So I decided to cut him, but doing that meant going all the way back to the first page.

I also happened to have several unwritten scenes floating around in my head that I wanted to add to earlier parts of the book. Going back through it from the beginning helped me do this, and my word count slowly went up again. By July 31st, I recorded my word count at 55,652, and I have no intention of stopping, even though July is now behind me.

While I can’t say that Camp NaNoWriMo is the reason I’m working on an unexpected project in the middle of the summer, I am thankful that it lit a little bit of a fire under me, at least as far as making a writing goal is concerned. If you’re the type of person who has to be accountable to someone (or something) else in order to finish a writing project, I highly recommend it. You also have access to a community full of fellow campers who will give you support when you need it.

Not to mention that, if you’re unsure of if you should try the full NaNoWriMo experience, it’s a great way to practice. I know that I’m ready. Any experience that encourages me to write my heart out is a welcome one.