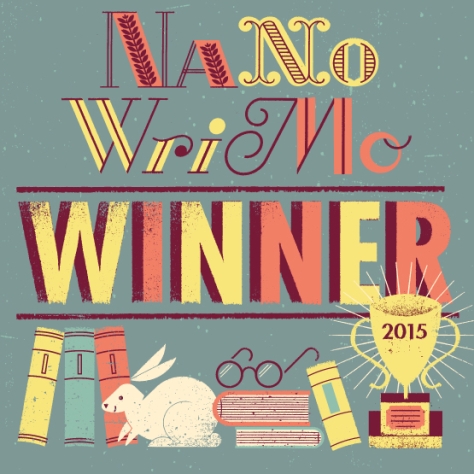 I know, I know, this is the third post I’ve written in nine days – a new record for me – but I just couldn’t keep it to myself: I finished my NaNoWriMo 2015 book! I was stressed out about it taking so long, but I guess spring break was the medicine I needed. That and a little visit from my muse.

I hoped that if I managed 2000 words per day (the usual goal during the month of November for NaNoWriMo participants – and much more than I’ve averaged since then), I would be able to finish the story. But as any WriMo knows, you can type 2000 words without saying much of anything at all.

So by Friday, the last official weekday of my break, I was feeling a little antsy. March was over, I’d hit 100,000 words (just over 101K, if you want to be specific), and I still had a lot to say. The problem was that I had this looming showdown between two characters, and I knew how I wanted it to end, just not how to get the characters there.

Then, the floodgates opened that night. I typed over 5500 words and was so close – but I still wasn’t done. I joked with my husband that I should just kill everyone off.

No, I promise that I didn’t take the axe to my characters. I actually wrote a real ending, but it’s clunky. When editing time comes, well, that’s when I’m going to pull out my axe. The manuscript is nowhere near ready for even my most trusted (and kindest) of beta readers; right now, there are some passages that are as awkward as a sixteen-year-old guy meeting his girlfriend’s dad for the first time. (Hey, that’s appropriate; this is a young adult novel.)

Anyway, I’m done, and I can breathe. I can actually think about other stuff for a while. Such as Camp NaNoWriMo, which officially began two days ago. Jeez, I’m already behind.

What, did you really think I was going to stop writing?

One thought on “The End of the Story”