So the school year is over at the Cotchaleovitch residence, and it is time to sleep until 9:00 every morning, let the kids binge watch TV while I kick back with a book, and only change out of pajamas and emerge into the real world when we’re down to our last Capri Sun. Once we’ve recovered a little, we’ll consider a vacation.

Well, not quite. But by the last day of school, I was feeling pretty elated that we’d all made it. There were a lot of firsts in the 2015-16 school year: it was my first year teaching full-time; it was Ian’s first year in school; and it was Peter’s first year with an in-school reading resource for dyslexic kids, which meant I didn’t have to run him to a tutor twice a week.

We were on the home stretch. Other teachers commiserated with me when I noted that my students needed a second spring break. Like a permanent one. For the last month of school, we were all just holding on. That’s not to say that there weren’t good days, but there comes a point when a child can only take so much, and then every new bit of info you try to cram in their brains just comes spilling out of their ears. I’m sure parents felt much the same way (read one mom’s hilarious recap of her kids’ end of school year experience here).

Then, when it seemed that all the end-of-year events were falling into place, my eight-year-old got sick. I mean three-trips-to-the-doctor-in-six-days, two-different-antibiotics, absent-for-six-days sick. My husband, my parents, and I took turns watching him, and I stressed out over what he could possibly have (at the third appointment, the conclusion was bronchitis, but the fever that wouldn’t quit is still a mystery). Believe me, I was ready for some uninterrupted home time.

But there’s a part of me that knows what will happen in the fall if I just totally deflate and turn into a zombie for the next two-and-a-half months: everything my kids have learned in the past year will be relegated to their mental back burners, and the readjustment period come mid-August will be painful for both them and their teachers.

I had a rough idea of what my kids needed to accomplish this summer. Peter has a summer reading book, and so he doesn’t forget all his math skills, we need to play some math games that his teacher showed me. As for Ian, he’ll need to work on his fine motor skills. From working with four- and five-year-olds, I know that strengthening his fingers can be as simple as letting him put beads on strings, practice cutting with safety scissors, color, and play with Play-Doh.

So now, to implement all of these things into the days we spend at home. It was actually during Peter’s sickness that it all came together for me. One day, when his was fever was down and he had the energy get creative, he made this cute monster-Mickey-Mouse-ears thing: 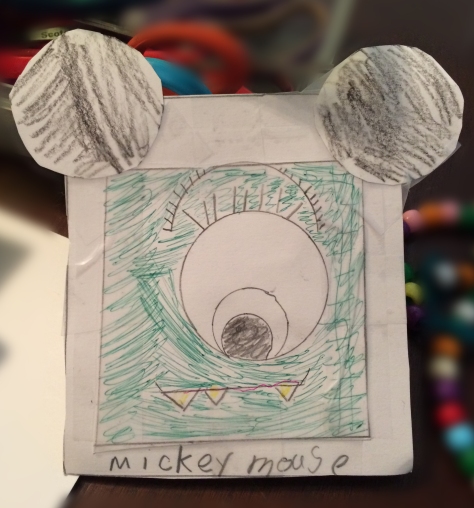 Ian loved it so much that Peter made another one for him. It shouldn’t have surprised me that the boys had so much fun inventing crafts from their own imaginations; after all, it’s what we encourage kids to do at school when we set up a table full of various supplies. It’s called “creation station.” At his age, it’s not the kind of thing Peter does much anymore, so it’s particularly enjoyable for him to do at home. 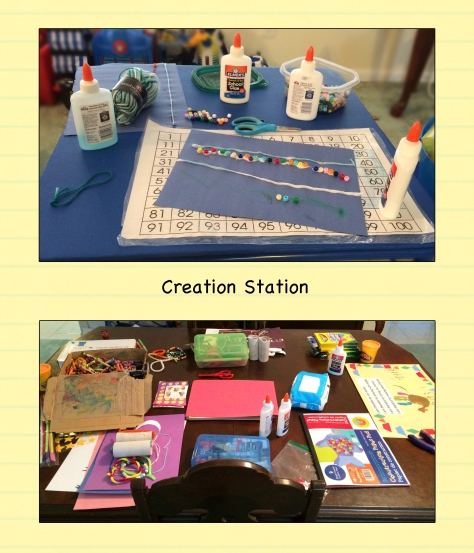 This is something that I can let my kids do with supplies already on hand and minimal brain power on my part. So many moms see crafts on Pinterest and then get stressed out because they think (I don’t know why) that their children expect perfection – or for them to spend hundreds of dollars on obscure supplies at craft stores. I promise you, they don’t. The kids I taught all year were usually happy with paper and crayons. While it may not be as easy as letting the TV babysit them, it keeps their little minds engaged without them even knowing it.

And the creation station portion of each day has an added benefit for me; it gives me a dedicated time to do a little prep for my class next year… and to do a little creating of my own. 🙂 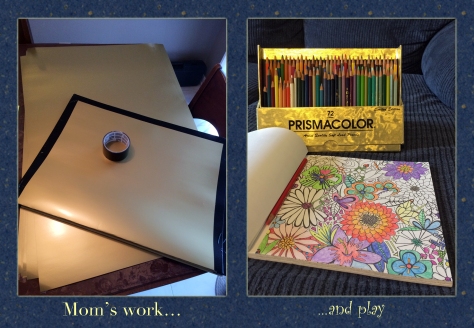