It has been quite the newsworthy week, both for the good and bad, locally and internationally.

At the start of the week, it was the tragedy of David Bowie’s death, and later, it was Alan Rickman’s. I’ll say that while Bowie’s was a shock, Alan Rickman’s came as a blow. And it’s not even like I knew him. Tragically, another acclaimed actor, who seemed to be a good person in real life, met an untimely end. But I’ve always had this thing about Alan Rickman, ever since he played the despicable Sheriff of Nottingham in Robin Hood Prince of Thieves. Maybe it’s because, as young a girl, I didn’t know to distinguish the actor from the character, so for years, I associated Alan Rickman with evil. It was only much later that I discovered that he was much more than the characters he portrayed. I admired him for so often choosing roles that were dark, challenging, even hated. Someone has to be very comfortable in his own skin to be able to sustain a career as such.

But getting back to the news…

Aside from additional tragic local news, there was also the national hoopla surrounding the billion-and-a-half-dollar Powerball. I’d never paid any attention to any sort of lottery before, but this one had the attention of even the most stringent non-gamblers (even if it was only to scoff). It’s hard not to wonder what it would be like to wake up one day as a billionaire. Some co-workers and I joked that we would happily “settle” for the lucky million-dollar ticket. Even after taking out taxes, that kind of money would make an incredible amount of difference in my life. And even big celebrities like Queen Latifa and David Duchovny said they were participating.

But what about people like David Bowie and Alan Rickman, who had a lot more than I’ll ever, even if not billions? Would that kind of money have made a difference to them? I’m thinking not. I’m thinking that they could already afford the best health care money could buy, yet they still both succumbed to the dreaded C-word.

While many people speculated about what they could do with that kind of money – from retiring at the tender age of 19 to buying houses in all the posh resorts around the world – I thought that I love my job and would hate to have to quit because of the sudden notoriety that being a big winner brings. If, somehow, I ever managed to get any kind of windfall that would allow me to do whatever I pleased (financially) for the rest of my life, I would want to hide it, so I could still do exactly what I’m doing right now.

I’m a pretty low maintenance girl. I don’t need fancy houses or luxury cars – although, I would like a cool reading nook or even library in my dream house. I wouldn’t spend the money on jewels or designer clothes because I’d rather wear yoga pants and a sweatshirt than anything else. It’d be nice to be able to live completely debt-free and know that my kids will always be taken care of. But money won’t cure my elder son’s dyslexia or my younger son’s whatever-he-has.

About the only changes I would make would be to buy a house closer to where I work, hire a cleaning lady once a week, and make my husband retire and become my personal chef. (He’s a good cook – no need to hire outside help.)

As for the rest – buying a new car with cash when the old one craps out or taking vacations on a whim just because we can or filling my library with all the books I could ever want – while that would be nice, there’s something to be said for earning it. Recently, we paid off a  car and finally bought a new one that has all the features we ever could have wanted but couldn’t afford until recently. And there’s something so fulfilling about knowing that we’re finally to that point – that we’ve made it ourselves.

And, hey, there’s still that very slim chance that I’ll make a comfortable living as a novelist. The odds are better than of winning the Powerball, at least.

And say that does happen – say that, someday, the world mourns my death like they’re mourning Alan Rickman’s – I’ll still want to live the quiet life. I’ll still want to sit on my couch or reading nook and be left alone to read a good book. Or read one of my favorites with my children or future grandchildren. I’ll still be enthusiastic about hosting book clubs. Because that’s who I am, and no amount of money (or lack of it) will change that.

And just because, I would like to end with a beautiful, very human quote of Alan Rickman’s. I think that anyone can appreciate it, but only true Potter fans will really get it. Alan Rickman certainly did. 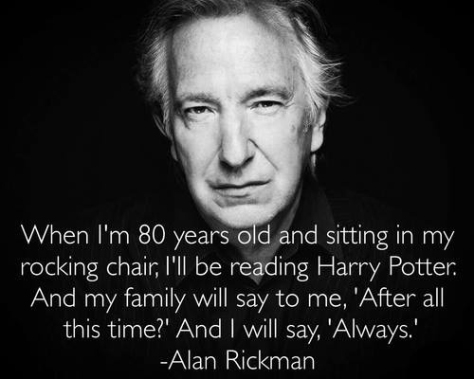