Two years ago, I posted a blog about the stress that surrounds the end of summer break and going back to school – and I wasn’t even the one going to school. Still, as a parent of a then-five-year-old, I was fully responsible for getting him there on time every day and felt that pressure. I don’t even remember if I had the same feeling last year – I was probably too busy to notice.

This summer, I’ve done more summery things than probably any other summer of my life, including a two-week vacation with my family. It would seem that a summer like this would stir that familiar anticipation, that early-morning-wake-up dread. But for once, I look forward to the days ahead, when I will have a set routine (even if it means a 4:15 alarm). Funny how things change.

Although I am a little anxious about what the fall will bring, with my little guy transitioning from loosely structured days with me or other family members, I’m thrilled that he’ll finally be in the classroom his brother first entered four years ago. I’ve spent much of the summer preparing my three-year-old by teaching him the songs he’ll sing in pre-school, as well as the concept that it’s not cool to walk out of the bathroom sans pants. It’s a work in progress, but he’s actually getting it. For the past month, he’s told me almost on a daily basis that he wants to go to school – and it’s not just Peter’s school anymore but Ian’s, too. And Peter, who will be entering the second grade, is excited to meet his teacher and see what friends will be in his class.

But the kids aren’t the only ones who are excited. A couple months ago, I received the call from one of their school’s administrators, asking if I would be interested in a PreK 4 assistant position. I jumped on it, probably sounding rather giddy. It was one of those pinch-myself kinds of moments. Summer break had just begun, though, so it didn’t sink in fully for a while. Every once in a while, when thinking about the upcoming year, I would have to remind myself that this year will be different. I will have an assigned parking spot. Instead of walking the kids up, they will come with me to my classroom. No more phone calls while I’m in the shower, asking if I can sub. All welcome changes.

Toward the end of July, I did have a little bit of an overwhelmed feeling, knowing that I had a couple weeks of training and pre-planning ahead of me. Before most of my teacher friends were even back, I was at school, learning how to administer and interpret the assessment we use for pre-schoolers and kindergarteners. Then this past week, while many of my friends posted pictures of their end-of-summer vacations on social media, I’ve been hard at work. I have my badge, which makes me official, and people keep welcoming me to the faculty, but I can’t help but feel like I’m still the same old volunteer-slash-substitute mom that I’ve been since 2011. I belong here, I have to remind myself. Not only do my colleagues help cement that feeling, but my delight in my position tells me it’s true. As I confided in another teacher, I’m having more fun than I feel like I should be allowed to have – and someone’s paying me for it!

Regular readers, fear not – I’m still writing. I’m not about to give up on that dream. But now I’m able to help support my family in a way that freelancing didn’t allow, and my kids and I will be at the same place every day (although in different classrooms). I’ve die-cut, laminated, copied, stapled, cut, sorted, and painted my way through a number of projects this week, and while it sometimes felt like the room would never be finished, I’m proud of the results. I’m working with an amazing teacher, and since I subbed a lot in PreK 3 last year, I know eight of our ten kids already. 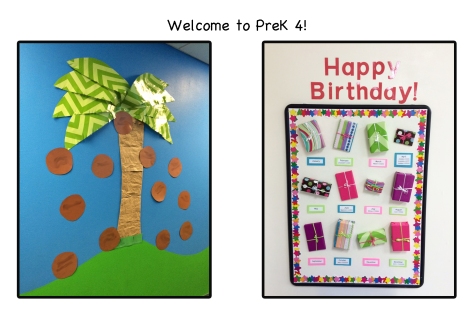 I’m sure there are days ahead when I will be tired and irritable. There will be kids who grate on my frayed nerves. There will be days and weeks that never seem to end. I’m not deluded about what’s to come. Even so, I am very excited. So much so that I don’t have back to school blues at all. Instead, I feel like I do when a much-anticipated vacation is just around the corner. In fact, I feel much like I did over twenty years ago, when I was a girl attending this very school.

The night before the first day back will likely be a sleepless one. I’m just the kind of person who gets too excited to succumb to unconsciousness. So if you see me Tuesday, I’ll likely be carrying matching grey baggage under my eyes. But don’t worry, this is exactly the kind of thing I don’t mind losing sleep over.

My son went back to school on Tuesday, and I actually allowed my worries about getting back into the school routine to taint my last few days of summer break with unease. I wasn’t walking around in a funk, but I certainly did stress some. Part of that could be remembering the meltdown I had the day before Peter went back to school last year. And then there are all the questions. Can I get everything done in the mornings? How will my younger son behave without the distraction of his elder brother? Will my house ever be clean again? When will I read and write? Instead of looking forward to autumn, which is my favorite season, I focused on the little things that get under my skin.

I guess the problem is that my summer was just too good. I really enjoyed the freedom afforded me this year. I don’t remember a time when I’ve ever been so productive, as far as writing goes. I wanted to publish my latest story on Smashwords (I have another story, “Stranded,” published there already), and I did finish editing it right on schedule. But I decided to try my hand with the children’s literary magazine market instead. This is a new venture for me – and a new way to get rejected. Still, I figured it’s worth a shot. Maybe the story will end up on Smashwords anyway, just not as soon as planned. I also wrote blog content weeks in advance, something that I’ve missed this week. Plus, I loved the slightly later bedtime for everyone in the house. I found a nice rhythm of getting laundry done, cleaning the house, and cooking the majority of our meals from scratch. With things going so smoothly, the looming prospect of shaking everything up was daunting. “Disciplined” should be my middle name because I almost always have a plan for everything and generally stick to it. My problem is that when things don’t go as planned, I’m liable to have a conniption.

What I discovered this week, however, is that it’s kind of like what they say about riding a bike. And I haven’t even fallen off yet, which is a plus. Peter and I went to visit his kindergarten classroom on Monday, and I was immediately swept up by the school bug that made me want to volunteer and substitute teach there to begin with. It’s like Disney World for elementary school (and if there’s anything I love, it’s Disney). After only two days back on the get-up-at-4:30-and-out-of-the-house-before-7:00 schedule, I wondered why I was so worried. Yes, I have less time to clean the house, less time to relax, less time to write because, during the school year, when I’m either substituting or spending my days at my parents’ business. But since I’ve been at work every day, I’ve gotten to see my parents more, and work hasn’t piled up like it did over the summer, when I only came in a few hours every week. My younger son’s nap time has adjusted about two hours earlier, so my productivity during his nap is simply at a different time and station. I carry my laptop with me everywhere, typing and researching in my spare moments. And it’s working.

I wish I could say it will always be smooth sailing, but there have already been days when I’ve gone to bed with too much left to do. If I have a new goal, it’s not to stress out too much about it. And another nice perk is that the guys (well, my husband and five-year-old – not so much the toddler) are pitching in, too. The things that I often did myself over the summer, like cleaning and cooking, are shared responsibilities now. Why in the world do I have to be supermom? I can adjust, if only I’m willing to be flexible, and if I can just let go of my usual I’ll-do-it-myself attitude and allow myself to be satisfied with things that aren’t one hundred percent my way, I’ll make it through just fine.