I first posted “I Don’t Make New Year’s Resolutions” at the end of 2012, a post about all the books I hoped to read in 2013 (four of which are still on my current list). And aside from the title, I didn’t go into an explanation of why I don’t make New Year’s resolutions. So here I am again, and this time I’ll try not to leave you hanging.

It seems that we can thank the Puritans for New Year’s resolutions. Abstaining from the revelry of the pagans, they instead reflected on the year past and the year to come. If you’re the introspective type, this could be a very constructive exercise. For instance, if you look over a year and see a lot of wasted spending, you could resolve to spend money more wisely, thus saving to buy a car or put a down payment on a house. And considering that Christmas is exactly one week before New Year’s Day, there are the ever-popular gym and diet resolutions. Many people take these seriously at first, only to fail when they realize that a month in the gym does not a truly fit person make or that getting up at 4:30 during the week is a tough commitment to keep.

So instead of using resolutions for their original, thoughtful purpose, we’ve turned them into a mockery. If you follow social media at all, you’ve likely read a number of resolutions from the snarky to the absurd: 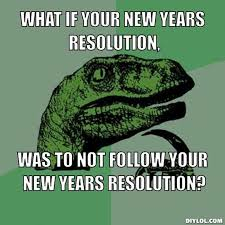 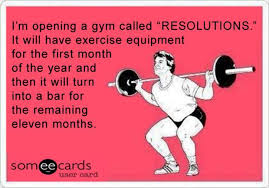 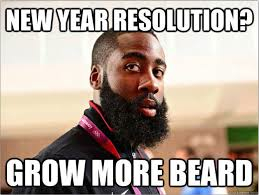 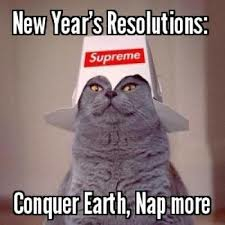 And I just couldn’t resist this one (it’s for you, Thomas): 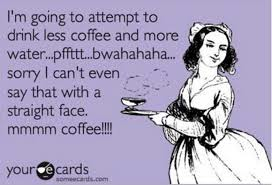 And then there are just the sad ones. You know the ones: they’re the same resolutions that get made over and over again every year, as if this time they will actually happen – except they never do: 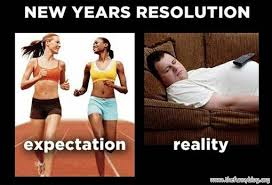 So I’ve never made New Year’s resolutions. That isn’t to say that I don’t make resolutions at all. If you know me, I’m extremely goal-oriented, so it would seem that this kind of thing is right up my alley. Not so. I have enough of a hard time keeping up with the stuff that I want to do throughout the year.

For example, when my kids spent a weekend at their grandparents’ house over the summer, I stayed up past three A.M. cleaning up their messes (check out the before and after photos here). And after that, I resolved that the house would be clean (well, mess-free, not necessarily dusted and vacuumed) every night before I went to bed. It was something I stuck with until Christmas (read about that here). But one week later, I was on the wagon again (so to speak) and cleaned the house. The only clue that Christmas even happened is that our dining room table is now a Lego train station.

I’ve also made lifestyle resolutions before, although never at New Year’s. The original resolution: to lose weight by exercising. Hey, it worked, but I had to keep it up in order to stay in shape. I did this through two pregnancies. I continued when my elder son started school, even though it meant waking up at 4:30 in order to get a workout in.

For the longest time, I could blame any weight gain on terrible dietary choices. I would eat healthier and lose weight, but unlike my exercise-all-the-time resolution, the eating healthier thing was on-again, off-again until I decided to go wheat free.

But it wasn’t the antidote to my problem. Sure, I lost weight but gained it all back, plus 10 pounds. I gained weight on carrot sticks, for crying out loud, so why not just eat pizza? I allowed myself to get sucked into the resolution black hole that consumes so many well-meaning individuals early every year.

It wasn’t until my doctor told me that there was a very good reason (hypothyroidism) for gaining weight while eating carrots that I realized that I needed help to keep my resolution. After hearing two hours’ worth of dietary history, she put forth a plan to get my body back to equilibrium without living on a prescription, and the first step was to go gluten-free again. Now, however, I am accountable to someone other than myself, and although it may sound backwards, I finally feel the wonderful liberation of being able to share responsibility for my resolution.

The gluten-free thing was for December. But after Christmas, when there would be fewer tempting foods hanging around the house, I had to go totally grain free, as well as dairy free (or very limited dairy). Sounds kind of like a New Year’s resolution, doesn’t it? Except that it took three or four days after New Year’s to eat all the gluten-free pizza and drink my fill of Coolattas. I felt a bit like: 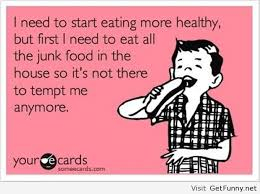 I’ve never considered going fully Paleo before. After all, I love dairy. This isn’t even a resolution I would adopt, even if I did New Year’s resolutions. But because it’s what my doctor thinks will fix my problem, I’ve dropped grains and had almost no dairy to speak of for the past five days. This will be my lifestyle for at least three to six months, at which point my body may have healed itself enough to add a few of those prohibited foods back into my diet upon occasion.

Although it is certainly not always the case, many of the people whom I’ve seen keep their own resolutions (no matter when they’re made) are the ones who must make a change or face unpleasant physical consequences. Having hypothyroidism is no picnic, but in less than a week of living this resolution-like lifestyle, I have lost over two pounds that I could not shed before, and miraculously, I only crave food that I’m actually allowed to eat. If things keep progressing like this, it may not take much will power at all to keep myself on track.

I hope that whenever we seriously resolve to do something, we all make our best efforts and stay accountable. That way, if we do actually decide to take a step back in eleven-and-a-half months and see what we did with our year, we won’t say: 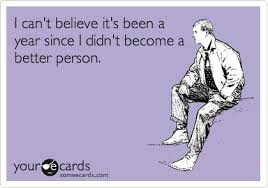 Instead, we can pat ourselves on the back, say, “Job well done,” and not have any regrets so dire that they require nearly-impossible resolutions to fix.

Oh, and if you just want more beard, more power to you.

I have struggled with weight my whole life, even if I appear to be in great shape now. I almost wish sometimes that I let myself put on a ton of weight before getting into shape to prove that I do have to struggle. It gets old listening to people say how nice it must be to have it so easy. I look the way I do because of choices that I make every day, and things could be very different, if not for an embarrassing trip to the pediatrician when I was ten or eleven. Instead of gently telling me that I needed to lose a few pounds, my doctor pinched my far-from-flat belly in one hand, jiggled it, and with an expression that said Do this or die, told me I needed to take care of that.

I was mortified. I knew that everyone on my dad’s side of the family struggled with obesity, and my dad had warned me on more than one occasion that if I entered adulthood overweight, it would be hard to take and keep the weight off. But I wasn’t worried—I was nowhere near adulthood, right? That doctor’s visit was the first time I felt degraded enough to do something about my body.

If I were to be reincarnated based on my metabolism alone, I would come back as a sloth. So for me it doesn’t come down to just diet or exercise but both. Over the years, I’ve discovered the tricks that do and don’t work for me. For instance, those cute little ten minute workouts don’t work. They simply don’t burn the amount of calories that I need to maintain weight, much less lose.

So when I come across something that works, I add it to my routine. The jump rope was the first tool that really helped me shed pounds, and I’ve used it regularly since my senior year in high school. Then in college I started drinking meal shakes, more out of convenience than anything else. I’ve drunk them ever since, from Kashi to Slim Fast, and now ViSalus. People have teased me about them, but if I didn’t drink them, it would be so much harder to maintain my weight.

I added P90X in 2009, and I love it. I supplement with the jump rope, a recumbent bike, and some circuit training to keep my muscles challenged. Someone told me once that I was crazy for trying an extreme workout. And I have no delusions of being on the next cover of the Sports Illustrated swimsuit edition—I’m still going to have knot-knees, no matter how fit I am—but with P90X, I did achieve the best fitness of my adult life. Never before could I do a real, unassisted pull up, but P90X helped me build up enough strength to finally do what I thought was impossible.

With P90X, I became a stickler for logging my food intake, something I only did sporadically before. Whenever I don’t do it, I gain weight because I don’t feel accountable. I finally found an app called SlimKicker that not only counts calories, but it also keeps a log of my weight and exercise, and it has fitness, diet, and lifestyle challenges that keep me on my toes.

I’ve organized my life to make sure that fitness is a priority (one of many). It takes discipline and sacrifice, but I hope to be a good example to my children. More importantly, I hope to be healthy enough to see them into adulthood.