I am pleased to say (and this doesn’t happen often), that I finished all the books from my 2019 book list. (Just finished the last two yesterday, but finished is finished!) I started grad school in August, and it really derailed my pleasure reading, but I anticipated this when I created my book list; I’d already finished most of my list before then. (I’m also happy to report that, out of all the books I read, only two disappointed, The Circle and The Girl In the Spider’s Web.)

Of the two books that I finished at the last minute, I didn’t even receive Rick Riordan’s The Trials of Apollo Book 4: The Tyrant’s Tomb until Christmas. And by “receive,” I mean that my husband and I each wanted the same books, so rather than each of us buying the same thing for the other, I bought them both, wrapped them, and stuck them under the tree for us. I didn’t even succumb to temptation and start reading before I wrapped them.

The other book that I finished yesterday was the last of the Artemis Fowl series, The Last Guardian. I read this series years ago and thought my pre-teen son would enjoy them. It’s taken a while to get through all eight books, but we enjoyed reading them together. He’s dyslexic and comprehends texts best when they’re read to him. Although he has an app that reads to him, I will continue reading with him as long as he lets me. He’s into World War II right now, so a couple novels on this year’s list are re-reads for me that I’m looking forward to introducing to Peter.

Another series I re-read this year was Harry Potter (the first four books of which I’ve now read 13 times). I read it to Peter when he was in the second grade, so now that Ian is in the second grade, it was his turn. We read the first three books in the Jim Kay illustrated format—they’re gorgeous. I knew that the boys would receive the fourth illustrated one for Christmas and asked Ian if he would like to wait to get it before we read on, but he couldn’t wait that long. Instead, we plowed through books four through seven, finishing before Christmas. His imagination is vivid enough that he had no trouble making it through them. (But we have the illustrated version of The Goblet of Fire now, and it’s spectacular.)

Following are the novels I read in 2019 (in the order I read them—the ones in red text are the extras that weren’t on the original list):

And now for the 2020 list. It may seem long, but all the Unfortunate Events books are ones I’m reading with Ian (after Harry Potter, he’s stuck on series). Otherwise, my list is modest because I know my time will be limited. I’m looking forward to continuing several series and reading some books that are new to me. I also hope I can carve out some time to re-read some favorites.

On the left is the book I just started (it’s really good!)… and another one that I’ll be starting soon. (Yep, more testing awaits. But when I’m done with adding to my certification, I hope to be done with testing centers for a while.) 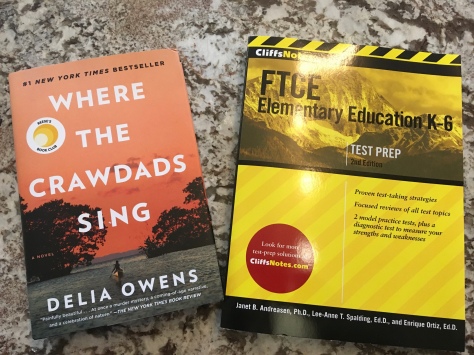 Without further ado, here’s what I hope to read this year (alpha by author):

What titles are on your list this year? Happy reading!